This podcast is a joint venture with Stuart Bray and Todd Debreceni. It's all about the making of stuff for makeup effects and prosthetics. Todd is author of 'Special Makeup Effects For Stage And Screen', what many consider to be the modern makeup FX bible. Stuart Bray is a working makeup FX artist with many years experienc. Credits include 'Saving Private Ryan', 'Shaun of the Dead', 'Dr Who' and more recently 'Game of Thrones'. If you have any FX questions you would like to see made into a featured blog post, then get in touch: stuartandtodd@gmail.com
Facebook Twitter Email RSS Feed Subscribe in Apple Podcasts
2022
February
January 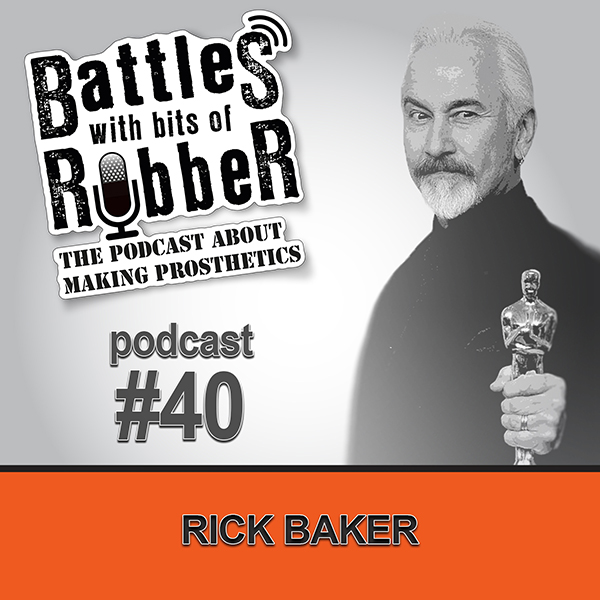 Rick Baker knows a thing or two about making stuff in rubber.

It's also fair to say he knows a thing or two about the digital world too, as he has been mixing the two for a while.

In 2015, when it was announced that Rick was to close his shop, the FX world was stunned and the bell tolled once again for the end of all practical effects as people speculated the end of live-action anything.

There was a Vice article at the time which claimed (again) the 'CGI was killing the industry' which, if you were knee deep in rubber and working crazy hours trying to get stuff done for a show like I and many others were was hard to take seriously.

Now the dust has settled, I was so stoked to get a chance to sit and talk to the man himself and see what he was doing with himself now he was out of the industry. He was after possibly the most well known and most respected inspirations working at the time, so what were we to do now he had hung up his makeup brushes?

The answer? Keep on making things.

Simply put, what has happened since Rick retired is that he is still working and still developing. He has worked on things he wanted to work on make them the way he wanted to make them. He has pushed into mixing up practical and digital techniques in both digital sculpting and 3D printing, post production elements as well as being able to indulge in some of the funnest Halloween makeups we have seen so far.

Following Rick on Instagram (therickbaker), you will see a man working harder than ever but this time, he only has to please himself rather than juggle a board of producers. No budget fights or sudden changes of direction to steal away the efforts so far. It is, frankly, amazing. If you have been inspired by the Rick Baker of Thriller, American Werewolf and Nutty Professor, then I am pleased to say your inspiration is still there better than ever.

Rick has been working on a scale model scene from the 1932 Frankenstein movie.
It really is very cool.

I particularly wanted to talk to Rick about this move into the newer technologies. We all love to talk about American Werewolf of course, but that ground has been covered before, and I wanted to talk to him about what is going on now. As you'll hear, Rick was an early adopter so it really isn't that 'new' after all.

As therapy for me, it totally settled my own fears on digital work and I am happy to say I am flying along with ZBrush, CAD and 3D printing now myself. I finally lost the fear and found the love for it. Only took me ten years.

Thanks again for listening, and if you would like to support us, as ever there is one thing you can do that helps more than anything - tell someone else about the podcast! Share this on social media and tell us how we are doing!

You can email us here direct at stuartandtodd@gmail.com

We appreciate your attention!