Closing moulds correctly is vital to get good casts out of them. There seems little point in making a good mould and then getting bad casts out of it.

In this episode we chat about things to consider when looking at ‘mould closure’. Essentially, a mould other than a flat or open mould will usually need to be attached or fitted to another component to produce a cast.

This could be another part of the mould if a ‘multi-piece’ mould is made and/or a core which will be placed into the mould to create the interior.

These pieces need to remain securely in position, and may be required to exert a lot of force if the cast piece needs to have thin seams which are more easily repaired.

That has cost implications - think about having to repair bad seams of fifty casts out of a mould which wasn’t closed correctly!

Small block moulds are often clamped together for speed and convenience, but what happens if the mould is huge, such as a full body or a dinosaur?

This episode has another hefty set of notes to help make sense of it all. It is picture heavy and goes deeper into what to look out for.  Get them here or the blog post for this episode.

If you enjoy this podcast and got something out of it, would you do us a solid and tell just one more person about us? Send them a link and help us grow!

Cutting edges are the point at which a core meets the mould, and is crucial in creating a fine edge for many appliances.

In flat moulds, there can be something similar even though a core isn’t involved, as it establishes where the appliance actually stops and the skin begins.

A cutting edge and overflow are critical in foam appliances, especially where a mould has foam latex added and a core is pushed into it. A gap between the core and the mould face would ensure the excess foam could escape, and the contact point where the mould meets the core would be decided carefully and precisely.

Go to our website to get the free booklet supporting this episode, or go here. 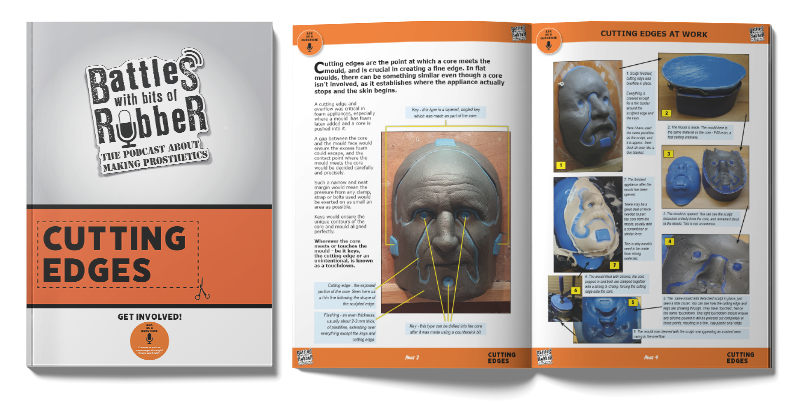 This principle has carried on with silicone, although usually excess waste is minimised owing to the fact silicone isn't mostly made of air, as is the case with foam latex.

Wherever the core meets or touches the mould - be it keys, the cutting edge or an unintentional, is known as a touchdown. Getting great edges is important in making pieces which will blend into the skin and appear as part of it, rather than exhibiting a clear boundary where the fake stops and the real begins.

If you enjoy this podcast and got something out of it, would you do us a solid and tell just one more person about us?

Send them a link and help us grow!